Mura River – a secret paradise for fishermen and nature lovers

The Mura River can be easily overlooked. However, if we delve into its secrets, we will be again and again enchanted. We walked on the Slovenian side of the Mura embankment. Wild, natural and genuine, as we would step into the jungle. Read more about the experience of this wonderful and secret river …

The secret world of the river Mura

Rivers always divide, at least on the left and on the right bank. But at the same time they also connect, if we sail their waters, or if build bridges over them. Especially, since they are the source of life.

For the Mura river, it is already so. With its rapids, rapid waves, dead river branches and wide river bed, this river is full of surprises. Now fast and ruthless, then lazy and slow. Such as it is also life …

Boris Bezjak is a passionate environmentalist. He is familiar with every smallest corner of the river on the banks between Ceršak and Trate. After every visit he returns a bit richer. This time he took me with him. He told me the story of the river, in which he sees mainly the exceptional natural heritage. And  also a chance for people to breathe with nature.

A walk by the Mura river

With Boris we walked on the embankment, which is on the Slovenian side wild, natural and genuine, as we would step into the jungle. But still – the beaten path, going gently up and down, and it is also well marked, testifies about human presence.

On the other, the Austrian bank side, there are casual Sunday walkers and cyclists to be seen. The path is flat there and adapted to those who are closer to a more urban approach. 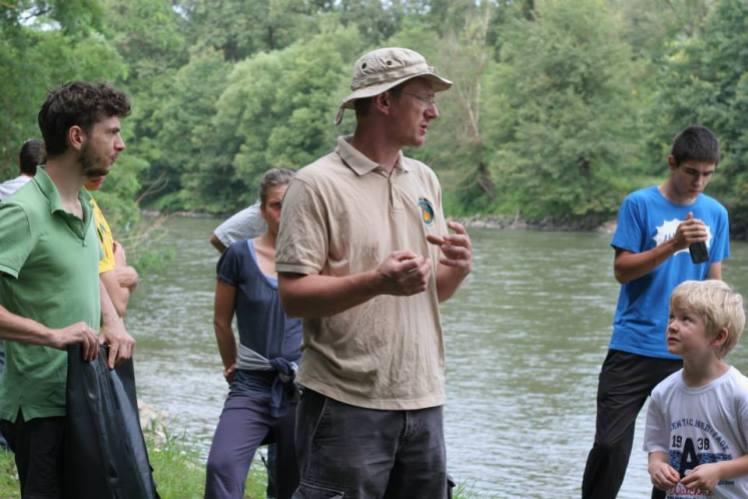 Boris Bezjak is a passionate environmentalist, who is familiar with every smallest corner of the river Mura on the banks between Ceršak and Trate.

A pearl of the Danube river system

“It is because of the limited movement along the river, mystification of its unpredictability, and stories of illegal crossings and border guards, Mura remained intact”, Boris tells me when we ascend the cliff, from which it is nice to see the silver surface of the evening river Mura. “And today we know that the river is a pearl of the Danube river system, which is in its rapids hiding 65 species of fish – ranking first among European rivers by the number of different species of fish.

Unique fishing experience in all seasons

Boris continues his narrative of the excellent conditions for fishing. “Mura offers to the fishing enthusiasts a unique experience in all seasons. In winter, the most attractive hunt is for burbot fish (Lat.: Lota Lota) and Danube salmon (Lat.: Huco Huco), which can reach a considerable size in Mura. In the early spring time we can head to the river with a fly rod and dry fly after the chubs of the exceptional size.

Of course, also after the trouts of all kinds, among them particularly worth mentioning is the presence of a grayling. Among the more traditional types of fishing such as bottom fishing, it is particularly interesting to note that due to the presence of such a large number of species, it is impossible to predict the type of a catch. A special challenge is also percomorpha. Thus, in the Mura river every type of fisherman can find his own place and its own type of fish.”

A river for the mature fishing enthusiasts

Boris is also a fishing guardat the “Angling club Sladki Vrh“. He ends his thought with the following sentence: “Mura is a river for mature fishing enthusiasts who want and are able to find peace within themselves and can cope with nature as it once was.”

For me, the curiosity pulls me forward.

Therefore, I invite him to head deeper into the woods, where nature along the Mura river is intact. There are many opportunities to observe birds, amphibians, insects and other animals. W walk even further among the archaeological remains of the ancient inhabitants who lived along the river and with the river.

Information for Mura fishermen and other visitors

Long migrations, the exceptional diversity of the channel, features of the Alpine river, slowly flowing water, standing areas in the backwaters, riverbed form of the stone, sand and gravel areas, the number of species contributes a high oxygen content, water purity, and, of course, the presence of organisms further down the food scale.

By the river Mura there is one of the most beautiful bicycle trails, which takes you to the spring of Mura in Austria, crosses Slovenia in Trate and continues to Croatia.

A hiking trail called Celtic Trail also goes by the river Mura. Across the Cmurek Bridge from the neighbouring Austria The Way of St. James and Mary’s Pilgrimage Route also lead.

We recommend a stop in the nearby town of Upper Konjišče where the fishing family has arranged a park there. The remains of an oak, which fell into the Mura river 1350 years ago, can be seen there. Fishermen are offering freshly baked fish, which can be enjoyed between the ponds and in the company of domesticated swans.